Finally we said our goodbyes to the bottles. I was dreading this transition thinking it is going to be so hard (X4) but it was actually not that bad. Yesterday I even cleaned out the counter space where we had our “bottle station”. It has been 5 days and everyone is going strong, yay! At the 12 months checkup, the pediatrician was happy with their weights and their growth si she gave us the OK to quit formula. But I wasn’t ready! I thought it is going to be the biggest deal ever!

Look at that big smile, she is so proud!

Like I said in my last post, Alexis was the first one to be done with formula. She just didn’t want it anymore.

So for a while, while the others were still taking their morning and bedtime bottle, I would sit her at the quad table and give her finger foods. She always looked very proud of herself 🙂 Because I was nervous to take the bottles away from the other 3, we continued to offer them each morning and night. But then Andrew wasn’t really interested anymore so he joined Alexis at the quad table. Hannah and Isaac did not show any intentions of being done with the bottles, instead they would gulp up 7 oz every.single.time! I was nervous. Ever since the quads came home from the hospital, they were all on the same schedule, they all did the same thing and now we had 2 in the Rock & Plays taking bottles and 2 at the table. Not good. So I woke up one morning last week feeling very brave and decided to hide the Rock & Plays since the babies associated them with “bottle time”. Once everyone was awake, I sat them at the quad table and I acted like that is our routine. Isaac looked very confused… but he went along. Hannah concerned me the most since at that point she was the only one that was not interested AT ALL in whole milk. Not even a sip. Well, breakfast went pretty well, but I decided to offer a bottle to Hannah and Isaac, just in case. They didn’t want it and I didn’t insist. Same thing at night. Next day I stopped the bottles completely and that was it, no turning back. That day Hannah started taking little sips of whole milk out of her sippy cup, she loved the water but she still wasn’t happy with cow’s milk. To our surprise, just a couple days later she started drinking whole milk like it was her favorite thing ever, phew! 🙂 At bedtime, instead of a bottle, the quads get a snack with milk of course. They’ve been sleeping well and seem to be very happy.
When we first introduced sippy cups, we got the Nuby Sippy Cups. They worked pretty well for the quads since they were beginners. They mostly chewed on the silicon spouts but we considered that “training” 🙂 Then we switched them to the Playtex Twist ‘n Click Lid because we happen to have them at home. We use those for milk. They babies really like them and so we adventured to Babies R Us one day to get them some more, but we couldn’t find any so we tried the Tommee Tippee  Explora Training cups. Great cups! No spills and fun colors. But it took a few days for the quads to get used to them, the flow is a little faster than what they were used to. As of right now, everyone is very happy drinking water and milk out of big kids sippy cups and once again Mommy & Daddy couldn’t be happier! I have to admit…. I  cried a few tears yesterday while cleaning our the bottle station… But I looked forward to this moment every night back when I used to fix 32 bottles for the following day. From 32 we went down to 24 and so on. One shelf in our fridge was designated to bottle only and not all were able to fit in there! 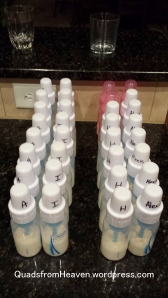 32 bottles ready for the next 24 hours

Our fridge almost a year ago!

Here are the quads, mastering their sippy cups! 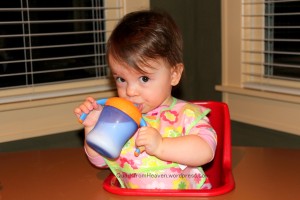 I love this picture of all 4 drinking out of sippy cups! 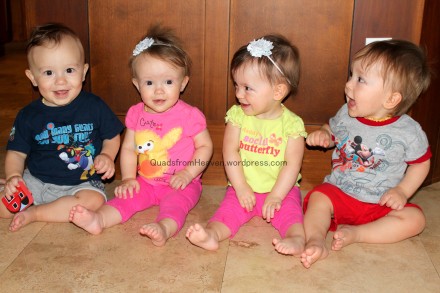 Have a great week everyone!
Lori.

Welcome to our blog! 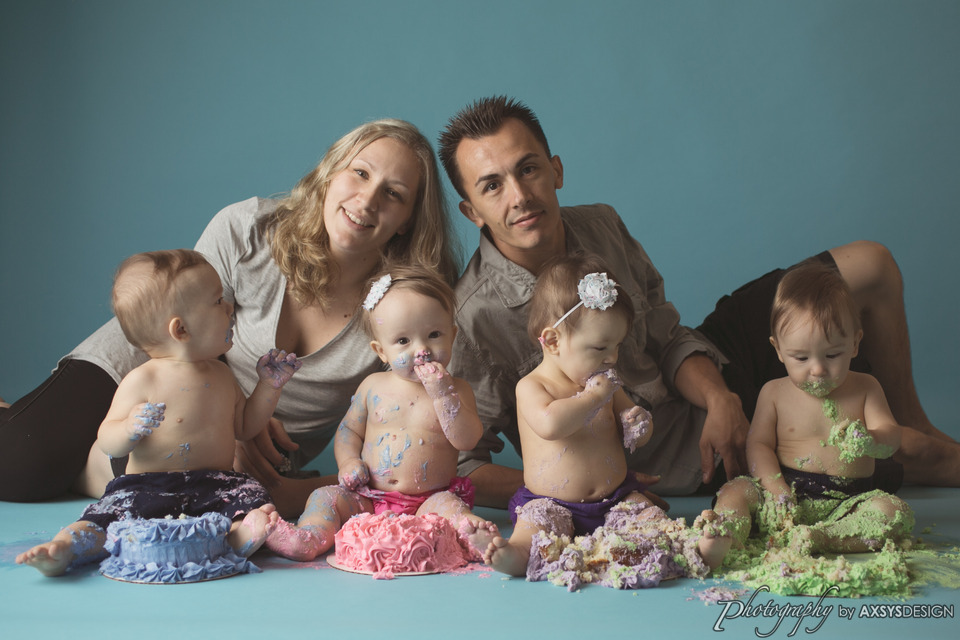 My name is Lori and I've been married to the love of my life for over 6 years now. We have been blessed with FOUR miracle babies that fill our lives and our home with so much love and happiness. Have fun taking a peak at our everyday life!

Watch our segment on the News!

In honor of World Prematurity Day 2014

Back to the Beginning 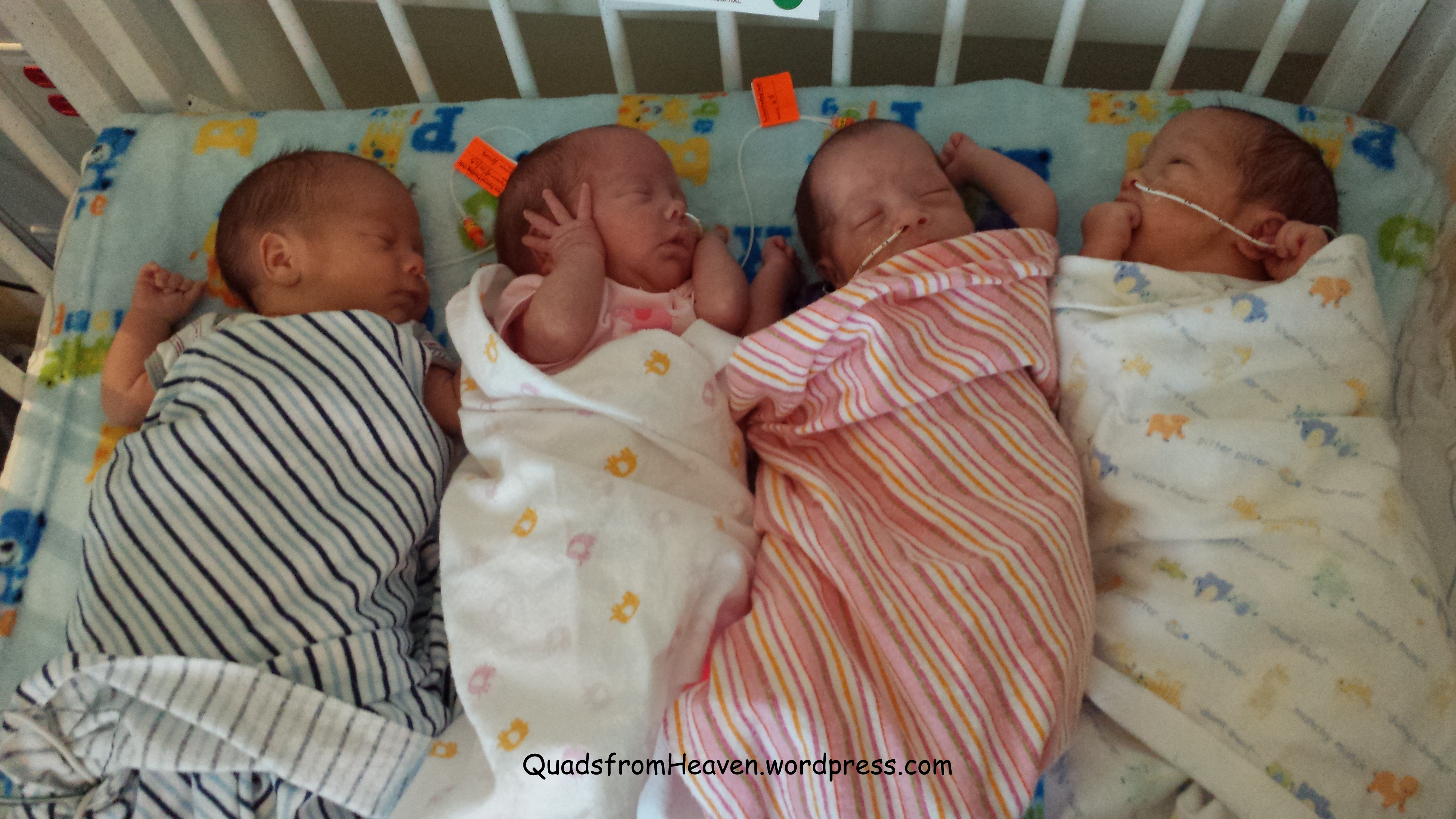 This is how our journey started...

living for the moment and making memories

Life is found in the little things. We have 5 little things running around our place and couldn't be happier (or more busy...)

The McCleary Quadruplets
The "Littlest" Lesnaus